Concerts by and for all ages at the VMA this summer: Gadelle, Ti-Manuel and Léah to be featured 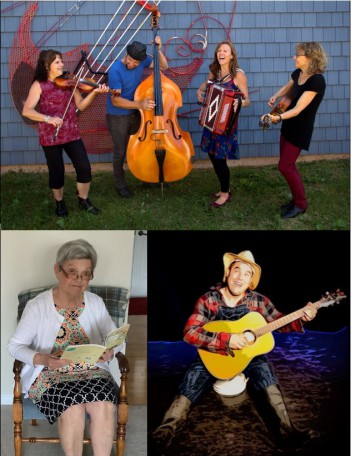 ABRAM-VILLAGE - June 12, 2021 - Visitors will have plenty of entertainment options at the Village musical acadien (VMA) in Abram-Village in the afternoons this summer. In fact, there will be professional performances for everyone during the week as well as performances by young artists and people aged 50+ on the weekends.

First, to satisfy visitors’ constant demand, the VMA will again this summer host concerts by the fantastic group Gadelle twice a day (at 1:30 p.m. and 3 p.m.), Tuesday through Friday, from July 6 to Aug. 27, in La Grange à Ti-Manuel. Admission is free but donations are appreciated.

Gadelle is a traditional but still relevant Acadian band from the Evangeline area that will soon release its second album. Its fiddler Louise Arsenault and organist-singer Hélène Bergeron are former members of the internationally acclaimed groups Barachois and Les Girls. Its singer-guitarist-accordionist Caroline Bernard and its multi-instrumentalist Rémi Arsenault have also performed on stages around the world with various groups.

All musicians of vast experience, the members of Gadelle dance and play with joy, conviction and ferocity while putting on one heck of a show! The sound is Acadian, the songs are in French, the banter is bilingual... the spirit of Acadia is alive and well! Their show is well rehearsed and ready to energize the crowd.

This year, three fun characters will be on hand to greet the crowd at Gadelle's shows, to chat with visitors on the VMA terrace and at La Grange à Ti-Manuel, as well as to entertain people with a comedic and/or historical monologue/dialogue and entertaining songs during the breaks. Jonathan Arsenault, the popular actor, musician and singer, will play the role of the fictional character Ti-Manuel, who takes great pleasure in entertaining crowds. Singer and musician Jeannette MacLellan will take on the role of Léah, based on the real-life local storyteller, Léah Maddix, who loved to meet and entertain visitors. Local actress Mia Bernard will play the fictional role of Mrs. Fiset, a new resident in the area.

Playwright Paul D. Gallant wrote the dialogue between Ti-Manul and Mrs. Fiset, while historian Georges Arsenault wrote Léah's monologue, based on the stories he collected from the real lady for his book "Par un dimanche au soir : Léah Maddix, chanteuse et conteuse acadienne," which he published in 1993.

What to do on weekend afternoons this summer in the Evangeline region? The Village musical acadien offers a great selection of musical shows.

First, on Saturdays at 1:30 p.m., from July 10 to Aug. 28, in La Grange à Ti-Manuel, there will be a weekly show by young artists, who will perform either as solos, duos, trios or groups. There will be something for everyone. Admission is free.

Then on Sundays, from July 4 to Aug. 29, again at 1:30 p.m., you will be able to attend “50+ Music Show Series”, a project of Les Francophones d’âge d’or de l’Île-du-Prince-Édouard, in La Grange à Ti-Manuel. The artists will perform solo or in groups, or in intergenerational family groups (with children or teenagers). This series, coordinated and launched by the VMA last fall, has been quite successful so it is being repeated for the summer. Admission is free.

PHOTO 1: Year after year, visitors request performances by the group Gadelle when they come to the Village musical acadien. The group is made up of fiddler Louise Arsenault, bass player Rémi Arsenault, accordionist-guitarist-singer Caroline Bernard and guitarist-organist-singer Hélène Bergeron.

PHOTOS 2 and 3: The characters Léah (Jeannette MacLellan) and Ti-Manuel (Jonathan Arsenault will greet and entertain the crowds before Gadelle's shows and during the breaks, by singing songs and telling stories.