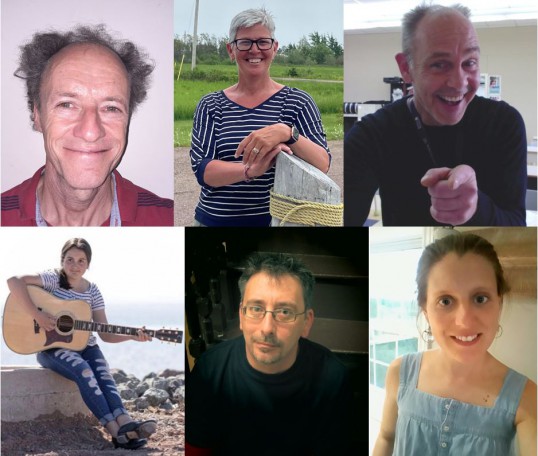 MONT-CARMEL - June 9, 2021 - "Tracy Arsenault certainly knew her stuff when she was a stepdancer, a stepdancing teacher and a choreographer, but now people will discover that she is also a talented actor when she plays the grandmotherly title role of Mémé in La Cuisine à Mémé rebooté dinner-theater at the Mont-Carmel Parish Hall this summer," says playwright and artistic director Paul D. Gallant.

"Of course, we must emphasize the fact that this beloved grandmother character will be presented in puppet form this year, just as she was in the early years of the dinner-theater when it was staged at the Acadian Pioneer Village in 1985 and 1986," he adds. In those early years, it was Ella Arsenault who played Mémé. Over the years, other excellent actresses haing played this popular role include Nicole Richard, Dianne Racette, Danielle Arsenault, and of course Marianne Rousselle. Then in 2019, it was Marianne's daughter, Debbie Rousselle-Montgomery, who had a turn at the part.

"Tracy is very excited to perform her own version of the Mémé character in this new edition of our evening of comedy and music, which returns to its original format of comedy sketches and music, as was the custom at the very beginning," says Gallant. "Our Mémé character serve act as the host or emcee for the evening. She'll be the thread that connects the scenes together. And she’ll be sure to keep everyone in line."

The artistic director is pleased that he was also able to recruit a mix of new and experienced actors to perform in the resurrected French-language show, which will play only six consecutive Tuesdays this summer, from July 20 through Aug. 24 at 7 p.m.

First up are veterans of the music and theatre scene and La Cuisine à Mémé, Wayne Robichaud (who has performed in countless dinner-theatres, plays and shows of all kinds), then Chuck Arsenault and Albert Arsenault (formerly of Barachois and Chuck & Albert, who have performed in comedy and music shows around the world). "With this master trio on stage, you can be guaranteed to laugh and be musically entertained all evening," says the director. The cast is rounded out perfectly with well-known local fiddler Samantha Arsenault and young stepdancer and singer Keera Gallant, who is already making a name for herself. All are looking forward to getting started.

This group will be joined by one or two special guests each week. The names of these comedians and/or musicians will be announced the week before each show.

"Most of what you’ll see on stage this year will be completely brand new, although you may recognize some of the characters or themes. And we might go on an occasional little trip down memory lane, especially when certain special guests drop by for a visit," concludes the playwright-director.

This production is part of a three-show series being presented by Les Productions Cuisine à Mémé Inc. this summer in Mont-Carmel.