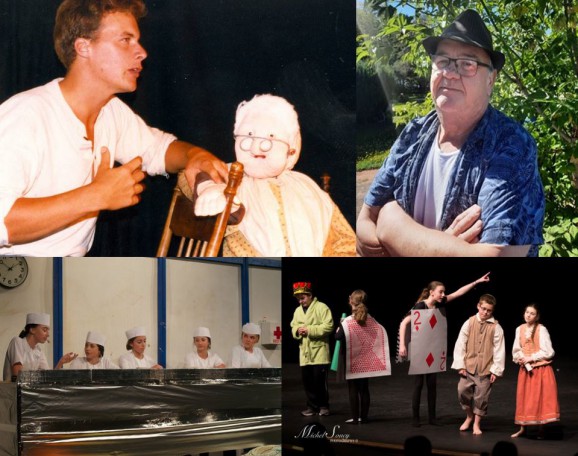 MONT-CARMEL – April 16, 2021 - It's official: after an absence of several years, French-language dinner-theaters will be making a triumphant comeback to Mont-Carmel this summer, thanks to the efforts of Paul D. Gallant, who developed the original concept of this type of show in the Evangeline region in 1985 and 1986.

In fact, the creator of the former dinner-theatre shows "La Cuisine à Mémé" will be putting on three different productions, all of which will play at the Mont-Carmel Parish Hall from July 14 to August 28. One will be a musical, a second will be presented in the original style of La Cuisine à Mémé (including skits and a musical portion) and the third will offer a matinee by and for children. These musical and theatrical productions will be accompanied by delicious meals prepared by the magnificent Chef Andrew Fisk of "À la Cuisine".

Gallant realizes that the pandemic restrictions will limit his audience a bit, but he feels it is important to give some hope and work to performing artists in these difficult times. He explains that his new company, Les Productions Cuisine à Mémé 2021, aims not only to create jobs, but also to promote artistic and community development.

This summer's flagship production will be the musical "Les filles de la factrie" (The Girls from the Factory), which will play Wednesday through Saturday nights at 7 p.m. (for a total of 28 shows). The company will consist of seven female actors, singers and musicians. The story takes place in a fish plant in the old days; the workers are not allowed to talk at work. One day, one of the workers pours a potion, concocted from an old family recipe, into the floor lady’s tea, which makes her sleep all day. The girls agree to do their jobs, but still take time to chat, tell jokes, dance and sing, making for a fun evening with lively old-time music.

The second production, which will only play on six consecutive Tuesdays (July 20 to August 24 at 7 p.m.), offers a return to the very first years of the dinner-theatre shows that took place at the old Acadian Pioneer Village in the mid-80s. At that time, the character of Mémé was a puppet, a kind of mistress of ceremonies; she and the rest of the company performed comic sketches based on various characters, such as Jean-Guillaume de la Bouillabaisse, the farmer, Ti-Pierre, Polycarpe the clam, etc. "La Cuisine à Mémé rebootée" will see a return to that original concept of the Mémé grandmother character as a puppet, with skits and a musical part at the end of the evening. "However, all the musical material, the script for Mémé and the skits will be brand-new," promises the author and artistic director. And since the cast of the first play is exclusively female, the cast of this second production will be mostly male.

THE PEASANT AND THE KING

The concept of the third morning show has two objectives. The first is to create a space for young artists (ages 7-12) to perform in preparation for the day when they will take their place alongside professional artists in the main shows. The play “Le Paysan et le Roi” (The Peasant and the King), presented in the style of old-time children’s stories, is aimed at a young audience. It will be presented in two acts with a combined duration of 25 minutes. A short musical section will be added at the end to showcase the singing, dancing and musical talent of the Young Company.

The second objective is to provide the public, especially young Island families or those visiting the Island, with an activity designed with them in mind. A special children's menu (hotdogs, fries, treats, etc.) will be offered at an affordable price. The show will be presented seven times on Saturdays at noon from July 17 to August 28.

Additional details, including cast, menu and ticket sales, will be announced in the coming weeks.

PHOTO 1: Comedic actor Daniel Bourgeois in discussion with the puppet Mémé, during one of the original "La Cuisine à Mémé" dinner-theatre sketch-and-music shows, in 1985.