A Christmas Show with Josée Boudreau and the group Maz 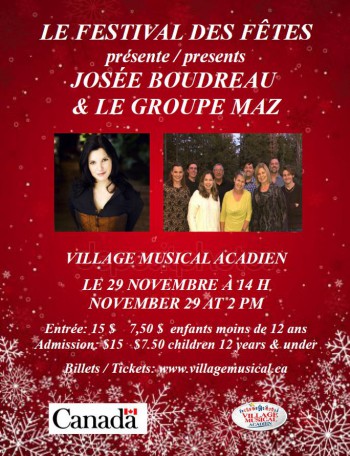 The first activity of the Festival des Fêtes features Josée Boudreau and the group Maz  who will present their Christmas show on Sunday, November 29 at 2 p.m. Josée started her career with Disney Cruise Line and has worked for many musical theater companies across Canada. She is originally from New Brunswick, but for several years now, she has lived in Mont-Carmel with her husband Mathieu Gallant and her two children. Josée performed on stage at the Confederation Center of the Arts, where she played the role of Evangeline in the play Evangeline. She also had a role in Mamma Mia. She was also part of the play Beauty and the Beast at the Capitol Theatre in Moncton last year. The Maz (Mazerolle) group is made up of herself and eight members of her family from New Brunswick. Together, for several years, they have presented a Christmas show that attracts many people from their region and surroundings. Admission fees are $15 and $7.50 for children 12 years and under. You can purchase your tickets now at this website: www.villagemusical.ca. Don't miss this great Christmas show!